How are F1 engines so powerful

When the Chinese Grand Prix and thus the 1000th World Championship race takes place on April 14th, Ferrari and Mercedes will scratch the 1000 hp mark again. But the current Formula 1 engines, which have six cylinders, 1.6 liter displacement, turbocharging and a hybrid system, are by no means the most powerful engines in F1 history.

BMW holds this record with the M12 / 13. Although it only had 1.5 liters of displacement and four cylinders, it is said to have delivered 1430 hp. Nobody could measure it exactly, only calculate it. The BMW engine test bench was only able to measure the turbo engine up to 5.1 bar boost pressure. The cockpit display ended at 5.5 bar. But the steam wheel was turned even higher in 1986 in qualifying.

This means that the performance of the Formula 1 turbo engines has doubled in just three years. Gerhard Berger, who drove the BMW engine for Benetton: “Those were the best cars of all time. They were real beasts, the races a ride on the cannonball. If it were up to me, Formula 1 should have a lot more power again. At that time we drove almost 1500 hp with our measly safety precautions - so why not 2000 hp? " 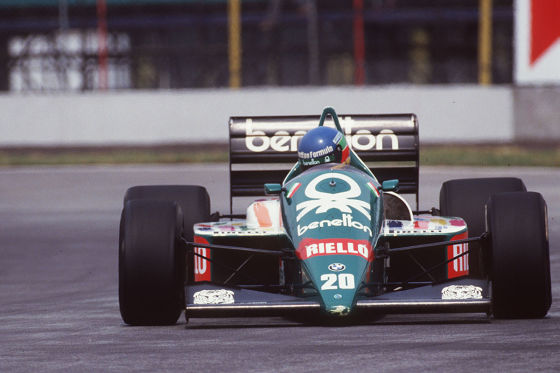 The turbo engines were tamed with boost pressure controls and a limitation of the tank capacity. To date, Formula 1 has not achieved such performance values ​​any more.
The largest engine in Formula 1, on the other hand, was the H16 engine from BRM, used in 1966 and 1967. Auto Union had already successfully built a 16-cylinder in the 1930s and BRM was a fan of large engines. When in 1966 the regulations allowed the cubic capacity to be doubled to three liters, BRM developed a 16-cylinder again. The 4x4 cylinder units were not arranged twice in a row, but 2x2 on top of each other in order to save installation length. With over 400 hp, the engine was quite powerful, but also weighed 232 kilograms. The BRM racer was therefore always 100 kilos above the weight limit. Only Jim Clark won a Grand Prix with this massive engine in the Lotus BRM in 1967. The engine was not only too heavy, but also prone to defects.

By the way, the smallest engine was built by Cooper-JAP. Harry Schell used this 1.1-liter two-cylinder at the Monaco GP in 1950, but was eliminated at the start of the mass crash.

Lotus team boss Colin Chapman even experimented with a gas turbine in 1971. The idea was not absurd: in 1963 Graham Hill and Richie Ginther set strong lap times in a BRM Rover with gas turbine at the 24 Hours of Le Mans, in 1967 Parnelli Jones drove the Indy 500 with the SRP Paxton gas turbine four laps before it failed Think about it in the end.

So Lotus had a twin-shaft gas turbine built by Pratt & Whitney, which originally served as a helicopter engine. The engine was quite powerful with 475 hp, but firstly it was also very thirsty and secondly it only responded with a delay and very jerkily. Emerson Fittipaldi achieved eighth place at the 1971 Italian GP. But after three races the project was over again.