The place for animals 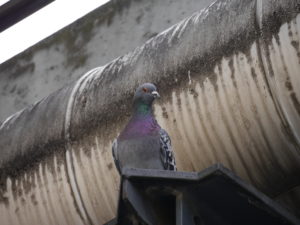 A gentle coo can be heard from outside. Disgust and anger boil up in my girlfriend. On the ledge in front of the small backyard window on the fourth floor, a city pigeon is jerking its rump on a freshly laid egg. My girlfriend is losing her nerve.

Unfortunately, the still unfinished pigeon will never see the light of day. Nocturnal cooing has recently plagued my girlfriend to the point of insomnia. The certainty that a small pigeon is developing in the egg in front of the thin pane of glass drives you cold sweat onto your skin. She takes action. With "sharp fingers" she grabs a broomstick. She energetically turns the window handle to the left and carefully opens the gate to the pigeon cave. She skillfully makes her way towards the pigeon's egg with the handle and nudges it out of the nest. Mother Taube doesn't notice anything, she hires elsewhere for a short time. Your birds cry will be great later. My girlfriend, on the other hand, achieved her goal. The raw fried egg shines slippery on the asphalt.

It is really difficult for the common city pigeon to be loved by us humans. While digging through the net, I find all sorts of spitefulness:

"Such a life as a city pigeon somehow gives you the wrong impression that you can always find something to eat without a job or money."

“A lonely city pigeon accidentally crossed a flock of racing pigeons in a hurry. Now she feels useless and disorganized. "

"If you feed them now, they don't get on your nerves because they don't have to run around between people."

Even feeding doesn't seem like an act of charity. It is certainly not particularly exciting. As a released domestic animal, pigeons are immediately on the spot without us having to lift a finger. Greedy and needy, unlike in the zoo or even in the wild, they do not allow any tension. It was foreseeable that we would get rid of our leftover food. So feeding isn't fun. 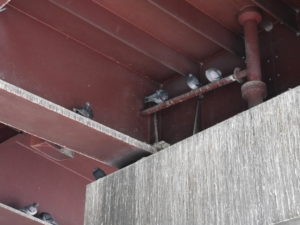 © H. Schirmacher The excrement runs downwards in a caustic way. The perpetrators are enthroned high above.

Especially not when we see the consequences. A review article by Australian scientists was recently published in the European Journal of Ecology, which summarizes all research on pigeon droppings. This is actually not incidental, after all, the pigeon droppings damage facades and monuments. In addition, there are heaps of bacteria and fungi in the damp mass. Various pathogens such as chlamydia lurk among them Chlamydia psittaci, also called ornithosis. It causes a flu-like illness in people. Also the bacterium Chlamydia abortus. It triggers fetal abortion in mammals, including humans. Also the fungus Cryptococcus neoformans, which affects the lungs of people and can even cause meningitis or encephalitis in immunocompromised patients, is stuck in the feces. And of course there is also salmonella.

The summary of the scientists shows the following: Unfortunately, the situation is that the size of bird shit and its chemical composition strongly depend on the bird's diet. If the pigeon eats poorly, its droppings are particularly corrosive. The more acidic the faeces, i.e. the lower the pH value, the greater the damage. The pH value can drop by two units if the city pigeon only feeds bread and cake. Add to that that Cryptococcus neoformans, the passable lung fungus, feels more comfortable in an acidic environment.

While the wild rock pigeon is a pure seed eater, the domesticated and subsequently released urban pigeon is an omnivore. In plain language this means: the more flabby burger bread a person consumes, the more miserable the pigeon eats. So we humans, with our all too comfortable carelessness, are to blame for the fact that the excrement becomes more and more acidic and therefore more damaging. 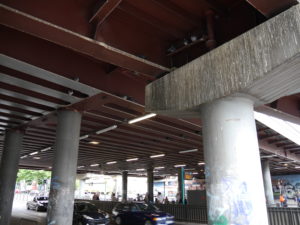 © H. SchirmacherRisky whereabouts: At some point it hits everyone. 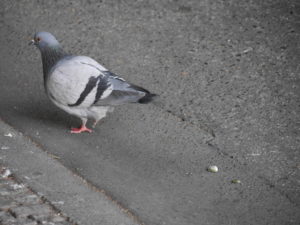 © H. Schirmacher Freshly glued: the next damp pile will certainly not be long in coming.

According to the Swiss biologist Daniel Haag-Wackernagel, who teaches at the University of Basel, pigeons drop a pile of feces every half an hour, regardless of where they are. How strange that it has never hit me. Despite my lucky streak so far, I hold my breath when the traffic light under the railway bridge at the Galluswarte S-Bahn station in Frankfurt lights up red. Pigeons crouch a few meters above my head. 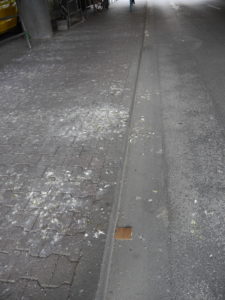 © H. Schirmacher Close your eyes and through!

The asphalt under my shoes is therefore the shittyest surface I've ever seen. Only when I get to the other side of the street do I feel safe.

Although the bird is now so confident in dealing with people, cars and bicycles - most of the specimens have completely lost fear - the pigeon does not fit into the cityscape. Is it because their existence is not aesthetic enough for the city? The New York researcher Colin Jerolmack describes in the article "How pigeons became rats: The cultural-spatial logic of problem animals" how humans perceive spaces and their living beings. Detached from its surroundings, the bird with its blue-gray plumage and a greenish-purple shimmering graceful neck is a pretty animal. The reddish eyes look exotic. 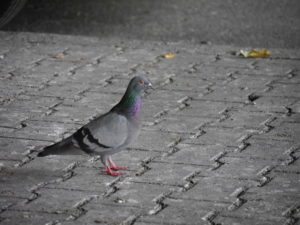 Humans perceive animals as something wonderful as long as they live in harmony with nature. However, as soon as the animal conquers spaces that were built for humans, the animal appears “out of place”. Jerolmack goes so far as to say that the dove embodies the antithesis of the ideal metropolis. The actual offense of the bird is not the health problem it causes, but that it pollutes the environment intended for humans.

Conversely, this means: If we want to love the dove again, we have to give it its own space. What could this look like? I fell in love with the tropical garden city “Gardens by the Bay” in Singapore. Landscape architects have created a park landscape on the banks of an artificial bay in the center of the city, under bank towers and hotels, which looks like the world of the Avatar. Luminous supertrees are reminiscent of the bioluminescent willow in the visually stunning movie by James Cameron. Why don't we treat the city pigeon to some artificial rock formations on quarry ponds near the city with currant bushes? A new predator of the pigeon could also lurk in the quarry pond. In the BBC documentary "Planet Earth II" David Attenborough shows how catfish devour bathing city pigeons in the southern French city of Albi. Hopefully it will take the animals a long time to learn to outsmart the fish.

Why we can't love city pigeons

Even with a bulging stump and torn plumage, we encounter the common street pigeon in our city centers without love, sometimes even hostile. With a little urban design enthusiasm, the animal among us humans could experience more mercy again.

An error has occurred. Please check your entries.