Is Haumea a dwarf planet

Dwarf planet Haumea has a ring

Exciting find: Astronomers have discovered the first ringed celestial body outside of Neptune's orbit. "Ring bearer" Haumea is also the first dwarf planet with a ring. This was evident when Haumea passed in front of a star and his ring briefly dimmed its light twice. How the 70-kilometer-wide ring was created, however, and whether other Trans-Neptunian objects are also ringed, is still unknown, as the researchers report in the journal "Nature".

For a long time the planets Jupiter, Saturn, Uranus and Neptune were considered to be the only ringed celestial bodies in the solar system. So the surprise was all the greater when astronomers discovered Chariklo and Chiron a few years ago, two asteroids with their own rings. Where these chunks got their rings from and why there seem to be hardly any other ringed asteroids is still unclear.

Now astronomers have tracked down yet another “ring bearer”: the dwarf planet Haumea. It is one of only four previously known dwarf planets beyond Neptune and otherwise rather unusual: Haumea is elongated, elliptical, has a crust of crystalline water ice and rotates faster than any other celestial body in the solar system.

To find out more about haumea, the team around Jose Luis Ortiz from the Astrophysical Institute of Andalusia in Granada used a lucky cosmic coincidence: They knew from calculations that Haumea would pass directly in front of a star on January 21, 2017 and then mobilized colleagues in the the whole world. With success: Twelve telescopes in ten different observatories observed the star cover of Haumea.

A "belt" around Haumea's equator

As Haumea passed in front of the bright star, the astronomers observed something unusual: "In addition to the main eclipse, there were brief shadowing shortly before and after the main event," report Oriz and his colleagues. Apparently there was something in Haumea's orbit that briefly swallowed the star's light. It couldn't be the two moons of the dwarf planet - but what then? 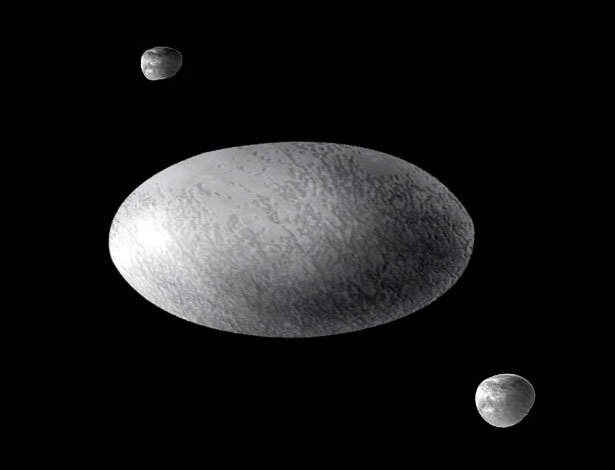 The ring not yet drawn in here runs in the orbit plane of the Haumea moon Hi'ika (bottom right) © A. Feild / Space Telescope Science Institute

“These shadows can best be explained by the fact that Haumea has a dense, narrow ring,” explain the astronomers. From the duration and intensity of the shadowing, they conclude that Haumea's ring is around 1,000 kilometers from the surface of the dwarf planet and must be around 70 kilometers wide. The ring appears darker than the surface of Haumea and lies in the equatorial plane of the dwarf planet.

First ring of a trans-Neptunian

The discovery of Haumea's ring is exciting in several ways: It proves that there are also ringed celestial bodies beyond Neptune - and thus in the icy outer worlds of our solar system. "It is possible that such rings appear frequently beyond Neptune," speculate Ortiz and his colleagues.

At the same time, the ring around Haumea makes this distant dwarf planet even more unusual and enigmatic than it already is. Because how he got his ring is still completely open. "With the discovery of a ringed object in the outer solar system, the fundamental question of how such rings form and develop becomes even more exciting," comments Amanda Sickafoose from the South African Astronomical Observatory. (Nature, 2017; doi: 10.1038 / nature24051)