We see cameras in color

Colored astro recordings with monochrome CCD cameras and a suitable filter set or single-shot CCDs with astrotential color matrices [1] have long since found their way into the amateur field. The problem of obtaining color-accurate images is by no means trivial and as old as color photography itself. To make matters worse, most astronomical objects are simply inaccessible to the human eye in terms of their color impression, and their own visual comparison is lacking. The human eye perceives objects as white in which the 3 color components red, green and blue are represented in the same size. The sun supplies, so to speak, the white standard, even if it is physically exact as yellow-white, spectral type G2 with a color temperature of 5778 K.

The basic principle seems simple. The object to be recorded is recorded separately in the 3 spectral ranges (RGB) with appropriate filters and then overlaid with a suitable graphics program to form a color image. The trick now lies in the correct weighting of the 3 color channels, which often have considerable differences in intensity with respect to the real color components of the recorded object. Compensation occurs either through exposure times of different lengths or through subsequent multiplication of the pixel intensities of the partial images before they are combined to form a color image.

The causes are complex, as they are influenced by all elements of the optical and electronic transmission path.

- The transmission range of the filters, the optical elements of the telescope and the camera window

- spectral sensitivity of the CCD chip

- Air layer thickness and pollution of the atmosphere (extinction)

If you now want to calibrate your own color images, two complementary approaches to determining your own weighting factors are conceivable.

1. Determination of the transmission behavior of the optical, electronic elements, the astronomical extinction and theoretical derivation of the exposure times or RGB weighting factors.

The greatest influence of intensity is understandably determined by the color filter itself and the spectral sensitivity of our photon detector, the CCD chip.

For RGB recordings I use the filter set from "True Technology Ltd., Woodpecker Cottage Red Lane, Aldermaston (UK)", which, like all interference filter sets, is characterized by steep, sharply delimited, spectral windows and accordingly only allows the desired color areas to pass. The following transmission curves were then determined with a spectrograph (Fig. 1). In addition to the 3 RGB filters, the transmission range of the infrared cut filter (brown) is also shown.

The ratio of the areas under the respective curves thus represents a first sought-after quantity. The integration was carried out by adding the transmission values ​​of the individual points of each curve from 190 to 2500 nm in 0.5 nm steps.

In Figure 2, the resulting relationship between the two main influences, the transmission curves of the filters and the spectral sensitivity of the silicon chip (TC245) of the Cookbook CCD camera can be seen. The spectral sensitivity comes from the manufacturer's data sheet [2] and was converted from the logarithmic to the linear representation and multiplied by the values ​​of the transmission curves R, G and B without a unit. (IR cut filter not yet taken into account).

It is easy to see how the sensitivity curve of the CCD (black) cuts the remaining RGB filter components / color windows to different degrees. The high infrared sensitivity around 800nm ​​must be taken into account, which leads to an unwanted opening, i.e. another green and blue window, and thus inevitably leads to a color balance shift. Since most optics for the infrared range are not corrected anyway and result in blurred, "bloomed" star disks, the use of an infrared cut filter (IR) is also urgently recommended for RGB recordings for this reason. The new generation of Astronomik-LRGB filters [3], which now have an additional IR cut filter integrated in each color filter, are also interesting. Figure 3 now shows the further limitation of the spectral window by the used IR filter from "True Technology", but also what remains of the total intensity of the photon flow solely through these two influencing variables - filter component and CCD sensitivity. The integrals under the 3 color components give the resulting weighting factors as a first approximation (Wf) again, with which the exposure times have to be extended or exposures of the same length have to be multiplied before the superimposition.

The spectral attenuation, due to the air mass layer M (z) increasing non-linearly from the zenith to the horizon, affects the 3 color areas differently. In addition to the air mass thickness and the wavelength of the light, the cloudiness of the sky also has a decisive influence on the extinction. It is determined by the number and size of light-scattering particles per unit volume.

As is known, the shorter-wave spectral components are more strongly scattered and attenuated, which gives us a blue sky on the one hand, but also the red of evening and dawn, and is described as extinction by Rayleigh scattering and haze extinction. The functional relationship is described in detail in [4]. In the following table I have calculated extinction values ​​for different heights above the horizon, with a normal view (b = 0.1, a = 1.3). Approximately the centers of the spectral windows in Figure 3 R [680nm], G [550nm], B [450nm] were used as wavelengths. This corresponds approximately to the standardized astronomical color system UBVRI [366, 440, 553, 700, 880nm].

Fig. 4: Atmospheric damping as a function of the zenith distance and wavelength [7]

The correction factors through extinction also have an effect on the weighted color relationships.

Figure 5 illustrates the pure influence of extinkion, how it would affect the Owl Nebula M97, if I had recorded it with the same exposure times at different heights above the horizon. 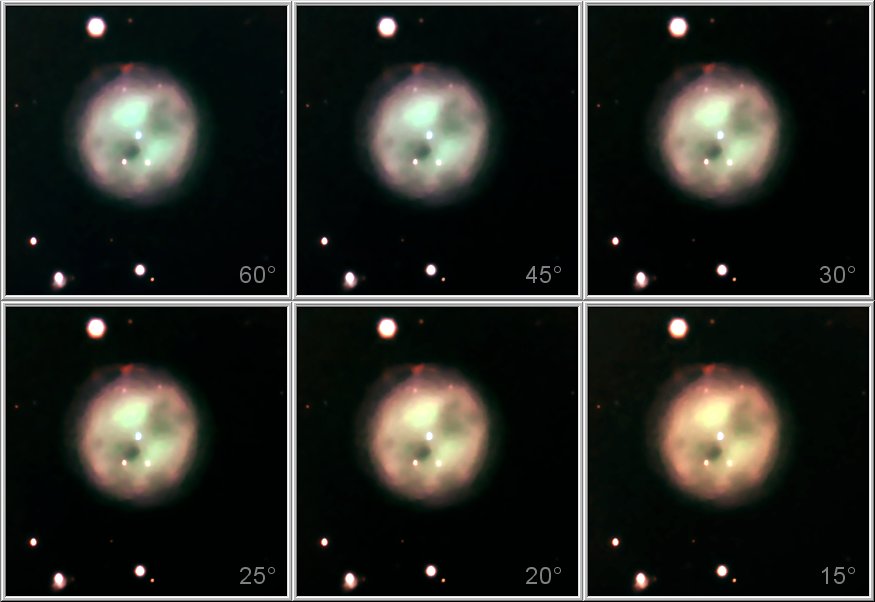 The scattered light from nocturnal lighting, which is annoying as light pollution, which is all too well known, adds a further influencing factor through the colored light of the gas discharge lamps. This light component adds up to the background and the image information and can only be determined experimentally.

Color comparison on the reference star

A practicable way of achieving a color-true composite is to calibrate it using known sun-like G2 stars. The pixel intensities in the red, green and blue image of the selected reference star are weighted so skilfully (* Wf) that they all have the same pixel intensities and are thus displayed as white.

Often, as in this example, there are no known, classified reference stars in the field of view. Here either preliminary work with a calibration image of a sun-like star with an approximately comparable height above the horizon (extinction) must be preceded or the spectral class of a star in the image can be derived from the (B-V) difference. 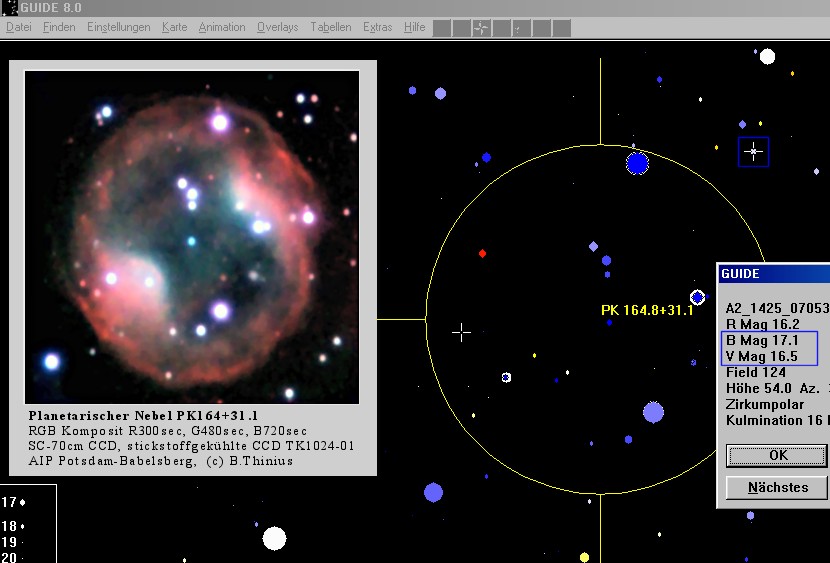 Figure 6: Selection of a sun-like reference star from the star catalog in Guide8

In a first image processing step, the background brightnesses of the 3 color images must be adjusted to a level using a suitable offset addition in order to measure the actual intensity maxima. 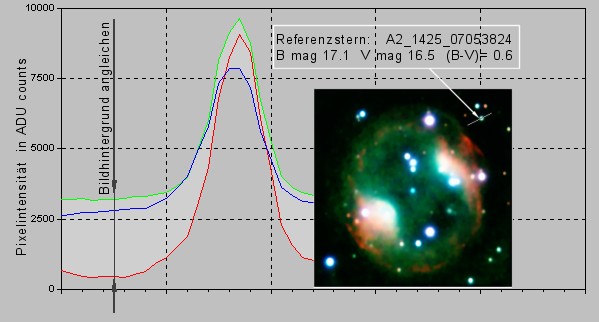 The multiplication with a suitable weighting factor Wfgreen = (10250/8500) = 1.206 raises the green intensity level to that of the red. The background brightness may need to be corrected. 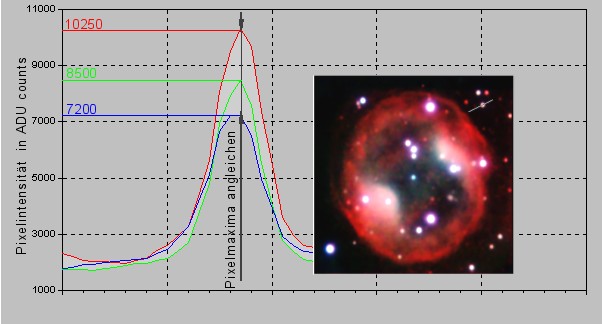 As a result of this RGB color correction, our reference star appears as a white object and the planetary nebula as we would see it with the naked eye. 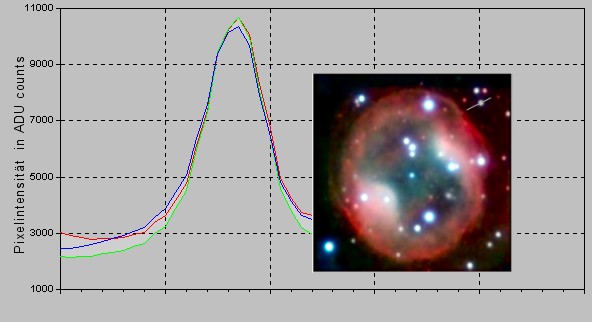 The description of the image processing software available on the market could not be discussed in detail here. The contribution should outline the feasibility of astronomical color composites and address the technical and atmospheric adversities and, above all, provide inspiration for your own experiments.