What do the Dutch think about Greeks

"The Greeks love the Germans"

Deutsche Welle: How has the attitude of the Greeks towards the Germans changed since the outbreak of the crisis?

Stathis Stavropoulos: I would like to clarify something right from the start. The attitude of the Greeks has not changed at all in recent years. The Greeks have nothing against the Germans. You still value the friendly relations between the two countries and love the Germans. Greece and Germany have had close ties for a long time. Many Germans visit our country every year and many Greeks have lived and worked in Germany for decades. What the Greeks find difficult, however, is to understand and accept German and European politics. Of course, it is primarily about the debts of Greece for which the Greek people are not responsible. Nevertheless, she has to bear the brunt of the burden so that the money borrowed can be repaid.

What is the opinion of the Greek population of Angela Merkel?

Angela Merkel is not popular. In politics it is often personified. It is unpopular because the Greek people, like all other peoples, have a cultural memory. And when the Chancellor speaks of a savings commissioner for Greece, the Greeks think of a "Gauleiter". And when you hear that Greece should become a kind of special economic zone, you almost automatically think of the theory of living space, which we know all too well from the time of the Second World War. Both the Greek people and I react, each in their own way, of course, to this climate.

How do you portray the Chancellor in your caricatures?

As a cartoonist, I am of course exaggerating. I want to shock and thereby stimulate thought. In my caricatures, however, I do not use the clichés or stereotypes that ultimately call for hatred - on the contrary. My representations are intended to remind Germans and Greeks alike of history so that past mistakes are not repeated. For me, Germany is Goethe's country and not Hitler's. I have already said that to some German media in interviews. Unfortunately it was not printed. As a Greek, I feel proud that most of Greece's supporters in the War of Independence of 1821, the so-called Philhellenes, were Germans. There were 4,700 Germans, of whom more than 2,000 sacrificed their lives. On the other hand, however, we are dealing with international usury of interest rates today who are attacking Greece. We resort to cartoons and other exaggerations to resist. But there is something else that pains the Greeks. We are the only country that did not receive a penny in reparations after the Second World War. Even though it was poor, Greece voted for the cancellation of Germany's debts immediately after the war so that the defeated country could stand on its own two feet again as soon as possible. How can it be that Germany is behaving towards Greece today as if we were the country that has been defeated?

Why are caricatures considered the ideal way to catch the spirit of the times? 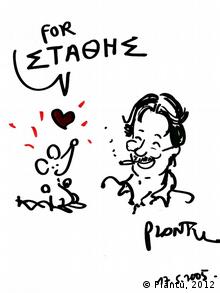 Caricatures are inherently "innocent". You are not playing a set game. They search for the truth and reflect it in a satirical way. However, satire has two sides. She oscillates between hope and despair. And that's the magic element in satire. The sadness can turn into hope and vice versa. Drawing caricatures is a difficult endeavor. Most caricaturists do not reach into the bag of tricks of stereotypes. They are for demagogues and populists. The proof of this is the European movement in support of the Greek people, in which cartoonists from all over Europe contribute a substantial part. I am deliberately not saying in support of the Greek government, as this and the previous governments bear the main responsibility for the desolate situation in our country.

How did you actually become a caricaturist?

I studied economics and film directing. As a student, I was always the one who decorated our posters with small drawings and sayings at demos. Those were actually my first cartoons. I literally sent her out on the street. Only then did I start publishing them in newspapers.

Greece's financial plight is actually only part of the crisis. Many Greeks claim it is just the tip of the iceberg. How do you think Greece can get out of that?

We need to find our self-respect and dignity again. The Greeks are not idlers, even though our ex-prime minister Papandreou called us that. We work longer than Germans or Dutch. However, our productivity is much lower. And the main culprit is the political system and the structure of the state. Everything has to change. But not through pressure from abroad, but from within. The Greeks have to change themselves. Greece cannot degenerate into a protectorate or a colony. Together with our European partners, we should investigate how we can repay the debt without the country having to go to its knees. Because that in turn would mean that neither the debts could be paid nor that Greece could remain in the EU or the euro zone. In my opinion, even the territorial integrity of Greece is currently in jeopardy. It is illogical for a European country to be driven into a situation comparable to that of a defeated country after a war because of interest and debts.