The treatment of vascular diseases (essentially occlusions and constrictions of the vessels of the arms and legs) has increased in recent years changed significantly. The primarily surgical approach has given way to the interventional approach. This procedure has become the routine method of first choice and is performed by cardiologists, angiologists or radiologists. It is inexpensive because the patient does not have to undergo an operation and only needs to be in hospital for three days. The aim is to preserve the extremity and improve the patient's quality of life. The standard method is balloon dilatation, also known in technical terms as percutaneous transluminal angioplasty (PTA).

The most commonly treated disease is peripheral arterial occlusive disease (PAD), also known as intermittent claudication. The atherosclerosis causes narrowing of the leg vessels, which force the patient to stop after a certain walking distance because of leg pain. They then often look ashamed in the shop window - hence the name. Poor blood circulation in the legs leads to poor oxygen supply, which leads to pain.

If a sudden closure occurs with severe shooting pain, this is one of the emergencies in which one should not hesitate to call the emergency doctor, because every minute counts. You should then lay the leg deep and not warm it.

The clinical indication for balloon dilatation is pain when walking distances of less than 100 m (so-called PAOD stage IIb), pain at rest (stage III) or even tissue loss (stage IV).

In a percutaneous transluminal angioplasty (PTA) by means of balloon dilatation, a small balloon is pushed into the vascular constriction via a wire lying in the vessel, which is then expanded by filling the balloon. A controlled tearing of the inner vascular layers is brought about and the Constriction is pressed to the edge. The diameter of the balloon chosen should be as large as that of the unaffected vessel.

Often this is not sufficient, as in the long term the constriction will occur again, which is why small metallic tubes, so-called stents, are built into the vessels. These are brought into the vessel on the balloon and unfolded there. Here they stay and and keep the vessel open. Stents are preferably used in larger-diameter vessels with high blood flow, as well as in the upper leg vessels (iliac and femoral arteries) and renal arteries. The introduction of stents into peripheral vasodilatation, so-called aneurysms, is not yet fully established. During the examination, the position of the balloon and the constriction are checked with the help of fluoroscopy with X-rays. 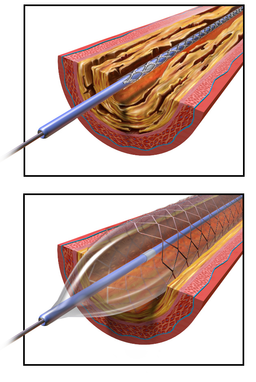 The peripheral balloon dilatation is one with certain vascular constrictions very successful treatment method: if the constrictions are short (preferably less than 3 cm in length), then success rates of 85-95% in the upper leg arteries can be expected.

Longer constrictions or even closures (larger than 10 cm) should be operated on, especially if they are not in the superficial leg vessels. The success rate is significantly lower in the arm vessels. If the constrictions are not hemodynamically relevant, i.e. if they make up less than 70% of the vessel cross-section and do not constitute an obstacle to flow, then no intervention should be made.

When should percutaneous transluminal angioplasty (PTA) not be performed?

There are complications that can arise Thrombosis (clot formation)that are flushed into the small vessels and can close entire branches there. Others are dissections, i.e. that part of the vascular wall loosens and the vessel is obstructed, or intimal proliferation, i.e. that the inner skin of the vessels obstructs the vessel as it grows, which is particularly the case with stents. Then often an operation still has to be carried out. 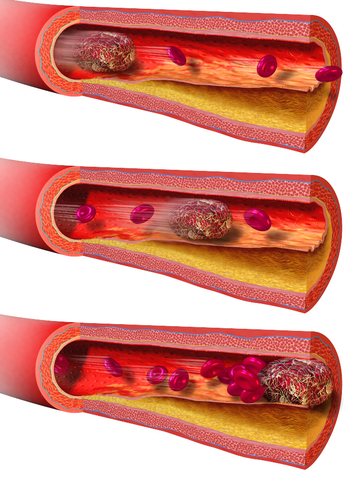 As a patient, one should always be aware that this treatment, like the surgical procedure, is always only one symptomatic treatment represent: Only the consequence of vascular aging is treated, but not the cause. This can only be done by a healthy lifestyle with avoidance of high blood lipids (cholesterol), smoking, high blood pressure, obesity (obesity) and diabetes (diabetes) can be prevented.