D: Sikh with turban cannot do without a helmet

Followers of the Sikh religion who wear a turban are not allowed to do without a helmet when riding a motorcycle. That was decided by a German court in a judgment that was published on Tuesday.

A man from Constance who joined the Sikh religion in 2005 had sued. Because this required him to always wear a turban, he applied in 2013 not to have to use a helmet. However, the city of Constance refused.

Freedom of religion "not violated"

The Freiburg Administrative Court has now found the city right: The rejection of the application does not violate the fundamental right to religious freedom, the judges ruled on October 29. Sikhs are obliged by their religion, among other things, not to cut their hair until the end of their lives, following the example of their historical guru, to cover it and to adorn it with a turban. However, wearing a helmet does not force the plaintiff to cut his hair or to expose it in public. 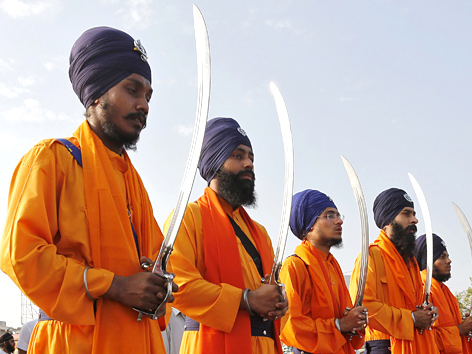 Sikhs in a religious ceremony in Ahmedabad, India

In addition, it is questionable “whether there is still respect for the creator and creation, where the decorative turban supplants the protective motorcycle helmet,” the court said. An appeal can still be lodged against the judgment within one month. (File number 6 K 2929/14).

Sikhs are supporters of a religious reform movement that arose in northern India in the 15th century. “Sikh” translates as “student”. The religion was founded by the itinerant preacher Guru Nanak (1469-1538). He tried to create a connection between Hinduism and Islam with the new religion. According to the Oxfordsikhs.com website, which primarily publishes practical information and tips for followers of the religion, there are around 27 million Sikhs worldwide. Most of them live in India. There are also many followers in the UK, Canada and the US. According to Oxfordsikhs.com there are 8,000 Sikhs in Germany, other websites write 15,000. About 3,000 Sikhs live in Austria.

Sikhs have common surnames as an expression of equality. Sikh women have the surname Kaur (princess) and men Singh (lion). They respect the will (hukam) of creation, which is manifested in the laws of nature. Sikhism is based on the principle of tolerance towards other religions and equality of all people and genders. Devout Sikhs live by strict rules: nicotine and alcohol are prohibited, as are adultery and pre-marriage sexual relations.

The hallmarks of a believer include uncut hair with a turban (for spirituality), a small sword (for courage and self-sacrifice) and a steel bracelet (for unity with God).