The history of jeans and their inventor Levi Strauss

If jeans celebrate their 150th birthday in a few years, it will be a very special anniversary. On the one hand, 150 years is really a proud number. On the other hand, jeans are probably the only trousers that have been able to assert themselves in fashion worldwide for such a long period of time. Best of all, she still does!

To learn how the triumph of blue pants began, who developed them, and why they were invented in the first place, you need to dig into their history a bit. The blue jeans have their origin in the United States, but their inventor was a German emigrant, more precisely, a Bavarian. According to the patent office, the trousers were born in 1873, when Levi Strauss and Jacob Davis, their founding fathers, patented the trousers invention.

Originally developed as sturdy worker trousers, today the jeans even move gracefully on slender legs over the catwalks of the largest fashion temples. For a long time now, it is no longer just about the spread of comfortable and hard-wearing trousers, but the success story does not stop at the most diverse fashion trends. They are probably the only pants that have established themselves in so many fits, cuts and designs.

Levi Strauss is the inventor of jeans

Levis is not only a world-famous jeans brand, but the pants also bear the name of the forefather of all jeans. Levi Strauss was born to Jewish parents in 1829 in Buttenheim near Bamberg in Upper Franconia. His father, a poor peddler, died prematurely and so at the age of 18 he emigrated to America with his mother and other siblings. There he gave up his maiden name Löb and called himself Levi. Like two of his brothers, he also worked in the textile trade.

When America was hit by the great gold rush, Levi moved to San Francisco with two of his siblings. As a clever businessman, however, he did not devote himself to the search for gold, but opened a trade in fabric and haberdashery. He quickly found out what personal effects the gold miners needed in addition to clothing on their hikes through the desert and expanded his purely textile range to include toothbrushes, braces and buttons.

More and more gold miners were buying from Levi and so he noticed that the miners had a lot of wear on their trousers and often ran around in torn and tattered trousers to save money. So he thought about how to help the brave pioneers. One thing was certain: they needed sturdy, durable trousers with pockets for their many small tools.

And that explains the reason for the invention of jeans. Levi Strauss took care of the hard-wearing fabrics through his contacts in the textile trade and came up with a comfortable trouser cut. He took the tailor Jacob Davis as a partner, who took care of the resilience of the trouser pockets and reinforced the corners with rivets.

In May 1873 they were finally able to apply for their pants patent. And by the end of the same year, the two imaginative businessmen had already sold 5,875 of their great pants (see Levi's 501 jeans). 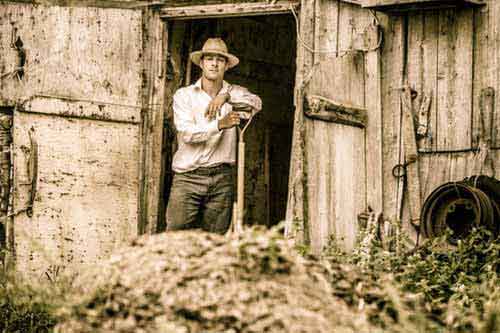 The two inventors quickly replaced the strong, brown canvas from which Levi and Jacob made their first jeans with hard-wearing cotton. They imported this cotton fabric from Nîmes in France. It was named denim based on its origins. As a trademark, they dyed the work trousers uniformly in an indigo blue shade and decorated them with orange-colored seams.

Success was not long in coming. Word quickly got around about the invention of trousers for the gold diggers, and finally other workers also found pleasure in the practical blue jeans. In addition to numerous cowboys, the farmers and lumberjacks also opted for the hard-wearing denim trousers and from then on were part of the satisfied customer base of the two inventive businessmen.

In the 1920s, when the two inventors had long since died, the real triumph of blue jeans began. As work trousers they were meanwhile on everyone's lips in America. The trousers were still dyed in the same indigo blue, the shade of which the blue jeans got their name from.

Even the cut hadn't changed in all these years. After all, the workers were satisfied with the comfortable fit of the trousers. Nobody made fashionable claims. The blue jeans just had to be hard-wearing, last a long time and not pinch or pinch with any movement.

It wasn't until around 1930, when the functional suspenders were replaced by the fashionable belt, that the demands on jeans also changed. Because the former worker's trousers were now also worn by the youth of America. The blue jeans became a symbol of rebellion. It was seen as a public sign of protest against tradition and authority. And so the fashion history of trend trousers began and has been unstoppable ever since.

History: Jeans on the way to Europe

Through the Second World War, in which many American soldiers fought on European soil, the blue jeans came to Europe. Because jeans had made it into army clothing in the United States. Although the trousers of the foreign soldiers, which were initially known in Germany as Texas trousers or studded trousers, did not have an easy start, it eventually caught on.

After the initial rant - in the GDR it was even forbidden to wear blue jeans in schools or at dance events - the trendy trousers achieved a breakthrough. This was also due to film greats such as James Dean and Marlon Brando, who also increased the success with their own level of notoriety and popularity.

Shortly after the end of the war, the first blue jeans were finally made in Europe as part of the reconstruction. The German factory called L. Hermann in Künzelsau in Swabia took on the production. Incidentally, this jeans manufacturer still exists today. However, the clothing manufacturer at that time has been operating under the "Mustang" label for 60 years. The name is supposed to reflect the American lifestyle of the Wild West and the "smell of cowboy".

Just five years later, from 1953, there were also jeans models for women in Germany. The first women's jeans were known as girls' camping pants. As was customary at the time, the stylish women's trousers had a zipper on the side. It was also made in the German jeans factory in Swabia. In contrast to the first women's jeans in America, which were tailored there in 1935, the German model was not reserved for women of the wealthy upper class, but was affordable for every woman.

An anecdote about how the Swabian manufacturer actually got the pattern for the coveted jeans goes as follows: Allegedly, one day a co-owner of the Swabian clothing factory was sitting with an American soldier in a bar. There he persuaded the soldier to give him six "Ami pants" for six bottles of Hohenloher schnapps.

Although the cut initially caused outrage among the strict mother-in-law, who was co-owner of the clothing manufacturer, the trousers immediately became a great success. The first order was for more than 300 pairs of pants, so the German prototype was also used as a pattern for future jeans models. 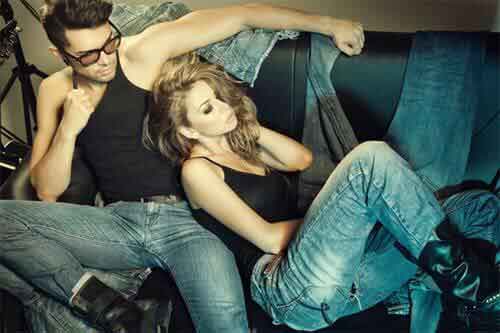 Jeans in Germany - history and today

Because the American soldiers supplied the poor Germans with various delicacies such as chewing gum and chocolate after the war, they were very popular with the German population. The typical American trousers quickly gained popularity and became the number one fashion hit. In addition to the German jeans brand "Mustang", jeans labels that are known to this day also developed in other European countries. These include "Lois" from Spain, "Big Star" from Switzerland and "Diesel" from Italy.

After less than 25 years, blue jeans had become so well established in Germany that German athletes wore Mustang clothing for the 1972 Olympics in Munich. The former workers' trousers from the States had increased their popularity in Germany and the rest of Europe to such an extent that they functioned as a cult symbol in various ways. Jeans have not lost this cult status to this day.

The first jeans crisis occurred at many of the now renowned denim pants manufacturers in the USA and Germany when baggy jeans were invented in the 1990s. The fashion trend towards wide, oversized trousers quickly gained popularity, so that conventional jeans brands often suffered major market losses. Many saw the only alternative to avoid this misery in the establishment of a second label, which only served the distribution of the so-called "bag fashion".

Today, however, the big jeans labels in both the United States and Europe have recovered from this setback. There are so many different models, patterns and designs like no other type of pants. And - even if it seems almost impossible - none of the existing jeans models is really out!

The passionate wearer of jeans can therefore really draw on unlimited resources. If you are a jeans fan, you can confidently choose your favorite design. If you choose the pants in the right fit and combine them in a contemporary way, they are still an eye-catcher today.